BEYOND JUPITER: THE STORY OF PLANETARY ASTRONOMER HEIDI HAMMEL
by Dr. Fred Bortz

This web page was written while Dr. Fred was hard at work on the biography of

planetary scientist Heidi B. Hammel, who is best known for her work on the atmospheres of the outer planets. The biography was one of ten in a women-in-science series published by the Joseph Henry Press, which is affiliated with the United States' National Academy of Sciences, and Scholastic Library Publishing in 2005.

Order Beyond Jupiter in hard cover from Amazon.com

Order Beyond Jupiter in paperback from Amazon.com

In August 2003, Dr. Fred had an opportunity to participate in a three-day observation session with Heidi and four others: David Lynch, Ray Russell, and Daryl Kim of the Aerospace Corporation, and Brad Perry of NASA. They were using the NASA Infrared Telescope Facility (IRTF) at the peak of Hawai'i's highest mountain, Mauna Kea on "The Big Island" of Hawai'i.

Left to right: Brad, Dave, Ray, Heidi, Dr. Fred, and Daryl in the IRTF parking lot, with two other world-class observatories in the background -- Gemini North eight-meter telescope (left) and the University of Hawai'i 2.2-meter Telescope. Gemini South, which can operate in tandem with Gemini North, is in the Chilean Andes.

Note added in December 2007: After you finish reading this section, click here for a Youtube video called "Hotel Mauna Kea." It is a song parody to the tune of "Hotel California" that describes the joys and frustrations that scientists experience on the mountain and at the IRTF in particular.

Heidi's goal was to study the atmospheres of Uranus and Neptune; Ray, an engineer, wanted to observe some stars that would enable his company to improve their orbiting products; astronomer Dave wanted to see if a new nova was forming a dust cloud; and Brad was broadening his knowledge about planetary astronomy so he could be more valuable as NASA decided which projects would be selected among the many possibilities for future space missions. Daryl, an engineer, was an expert on the observational device known as BASS, the Broadband Array Spectrograph System, which took the infrared (IR) light entering the telescope, spread it out into the IR equivalent of a rainbow or spectrum, and measured how much energy was in different portions of that spectrum.

Of course, Dr. Fred wouldn't go to The Big Island without visiting Hawai'i Volcanoes National Park. This web page is a collection of Dr. Fred's own photographs that tell the story of both the observation and the trip to the National Park. Many of them will appear in the finished book. For now, feast your eyes as you share Dr. Fred's exciting journey!

Dr. Fred leaves his home in Pennsylvania at 7:00 on a Saturday morning to catch a 9:30 flight to San Francisco, where he transfers to another plane to Kona on the West Coast of The Big Island of Hawai'i. It takes Dr. Fred almost twelve hours from the time his plane leaves the gate in Pittsburgh to his arrival in Kona at about 3:30 p.m. Hawai'i standard time. He rents a car and drives about twenty miles south to the town of Captain Cook, where he eats a light dinner and goes to bed early.

Because his body is still on Eastern time, Dr. Fred wakes up at about 4:00 a.m. and is on the road again at 5:00. He rounds the southern end of the island, coming within twelve miles of the southernmost point in the United States before heading north again on the east side of the island, where he sees

daybreak over the Pacific Ocean. Before 7:00, he reaches his goal

His first stop is the Volcano House Hotel, where he has breakfast and steps out on the rear patio for his first glimpse of

the caldera of Kilauea Volcano, with steam vents at its bottom (not visible here) and its famous steaming bluffs.

Then it's off for a drive around part of the crater's rim, where the first stop is in a rainforest area that includes

the Thurston Lava Tube, where flowing lava cooled on the outside first. It is like a cave without the limestone stalactites and stalagmites. Because of a downpour the previous night, the cave roof is leaking and puddles have formed. Dr. Fred didn't bring waterproof shoes, so he can only go about halfway into the tube before coming to a deep puddle that goes all the way across. Normally, people can walk all the way through on dry ground, a distance of a few hundred feet!

With his spirits undampened by the water, Dr. Fred gets back into the car and drives a short distance toward Chain of Craters Road, where he plans to turn south toward the ocean, but stops first to explore a trail through an area devastated by a 1959 eruption of Kilauea. In some areas, plant life has returned to cover the ground. But in other areas, it is harder for seeds to take root. The plants in those spots remind Dr. Fred of one of the themes in his book about Heidi B. Hammel. She doesn't allow herself to be discouraged by a challenge and often achieves work that scientists consider beautiful,

like this tiny plant with its striking red flowers. (Notice the size of the plant compared to a penny.)

Chain of Craters Road goes all the way down to the Pacific Ocean, dropping a distance of about 4000 feet in nineteen miles. Just as scientists need to pay attention to details in their research, Dr. Fred discovers he can walk across the hardened lava and get close to the shoreline if he is both adventurous and careful--

-- and he is rewarded with an unusual sight:

a natural arch carved into the lava by seawater!

Before the lava from Kilauea started taking a new direction in recent years, Chain of Craters Road connected to another road that went all around the island's eastern shoreline. But now the volcano frequently takes fresh chunks out of the road. In March and April, 2003, a half-mile of roadway and the old turnaround area had to be abandoned. Dr. Fred has to laugh when he sees these signs that got caught in the flow.

Then he checks his watch. He barely has time for lunch and a stop in the giftshop to pick up teeshirts for his twin grandchildren and a bib for his baby grandchild soon to be born. 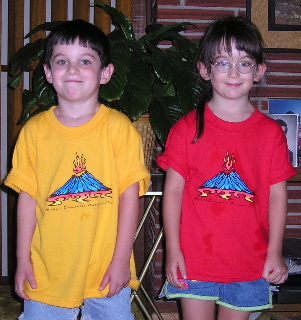 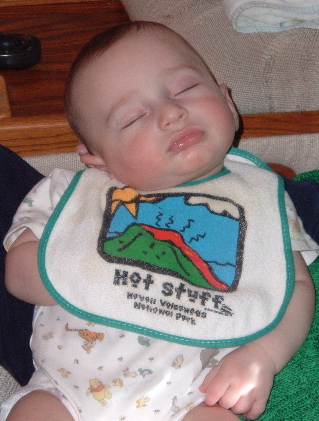 Then it's off to Kona airport, where he is scheduled to meet Heidi after she arrives on the same flight that he had taken the previous day.

Heidi laughs when she tells Dr. Fred about people's reactions to her frequent trips to The Big Island to observe at either the IRTF or the nearby Keck Observatory, which houses a pair of much larger (ten-meter) telescopes with an "adaptive optics capability" that eliminates the smearing effect of the Earth's atmosphere. "That's not work. It's vacation," people tell her.

They couldn't be more wrong! From the time she leaves her home in Connecticut until the time she returns, Heidi does nothing but travel (24 hours or longer round trip), work (observing dusk to dawn and discussing observations much of the daytime hours), sleep (not nearly enough), eat (usually dormitory food plus plenty of sugar cookies at the summit), and drink (non-carbonated beverages at the summit because the very thin outside air allows bubbles to expand in people's insides, and large amounts because the humidity is very low when the clouds are below the observatories -- which is most of the time). Instead of enjoying a vacation, Heidi experiences the discomfort of airplanes and high-altitude living that always makes her body very uncomfortable and her brain less efficient.

On top of that, Heidi has to schedule observations when the positions of her favorite planets are favorable. That makes coordinating her travels with her family's needs very complicated. She and her husband, an engineering manager at IBM whose work also calls for travel, are raising three very bright young children, currently ages 2, 4, and 6. In the entry to their home is the family calendar, on which they mark their travel times so that one of them is always home, and reserve time for them to be together as a family. When Dr. Fred visited Heidi at her office at home (Her employer, the Space Science Institute, is in Colorado, and she communicates by computer and telephone), the calendar looked like this:

Notice Dr. Fred's visit at the beginning of the month, along with Heidi's mother ("Graga" to the children) and the trip to IRTF about two weeks later.

With Heidi at the wheel, Dr. Fred got to enjoy the scenery as they drove up-up-up from hot and humid Kona to the cool 9300-foot level of Mauna Kea, where the observers and support people live in dormitories. They checked into their rooms and met Ray for dinner, allowing a few hours to adjust to the low oxygen level there before heading up to the much thinner air at the summit, where the oxygen content is about forty percent less than at sea level. Heidi drove a four-wheel-drive IRTF vehicle up to the summit along a nine-mile, steep, mostly unpaved road with a series of switchback turns. About two hours was enough for the first night, and Heidi drove back down to the dormitory, where she and Dr. Fred went to their rooms and some badly needed sleep at about 10 p.m. Taking the six-hour clock difference into account, Dr. Fred realized that Heidi had been awake for 23 hours!

The next day, the team began final planning for their observations. To make sure they could handle the dusk-to-dawn work schedule at the summit, Heidi and Dr. Fred took an afternoon altitude-accommodation trip back up the mountain. There, Lars Bergknut put the telescope through its paces,

allowed Heidi and Fred to see the three-meter (9.8-ft.) diameter IRTF mirror up close and personal, and took this photograph so they could remember the experience.

After a short nap and dinner down in the dorm, it was time to get serious about work. Back up to the summit they went, where they worked until they heard the words, "Sunset call!" The summit is above most of the clouds, and sunset is a not-to-be-missed event,

as you can see in this photo, taken by Brad, of Heidi and Dr. Fred with the Keck Observatory in the background. You can see the cloud layer below them and a few high clouds. Those high clouds make for beautiful sunsets, but they can mean problems ahead for astronomers.